We waited out most of the rain and left Westport on Thursday morning after fortifying ourselves with fresh donuts and coffee from Little Richard’s. Highly recommended if you are ever in Westport!

We started our two hour watches after we passed the bar and continued them through the night. Again, we don’t have much to report in terms of wildlife sightings. The weather was pleasingly calm, although rainy and foggy for much of the time. We made good progress toward Cape Flattery, which we spotted Friday morning. We had plotted the most conservative course, which is outside of Tatoosh Island; the swells were very small, the winds were low and we entered the Straight of Juan de Fuca. One of the first things we noticed on the radar was a huge cruise ship on our port side, a safe distance away. The Straight is 11-17 miles wide and the ship was in the shipping lanes, while we were outside of them. We soon entered peaceful and beautiful Neah Bay, which is about 5 miles from the Cape. Neah Bay is part of the Makah Reservation and the Makah people run the marina. We took a slip for the night and went out for a good pizza in town.

We headed for Port Angeles on Saturday morning. It was about a 55 nautical mile trip, and most of the day there was thick fog. We enjoyed the time it was sunny though, and it is so nice to be out of the swells and biting wind of the open ocean! It’s so different to be able to walk around the deck easily, not worry about things crashing around below, etc. We even had a sail up for a while. At one time during the passage we had to weave through no less than 14 small fishing boats in the fog. Talk about nerve wracking! We also tracked several container ships on the radar, but again, they were in the shipping lanes and we were able to stay out of them on this trip.

The entrance to the Port Angeles Boat Haven is a blind entrance, and we (at least I) was nervous about entering, but we went for it and it was totally fine. We docked easily at about 7:00 pm and had a peaceful night’s sleep. Today it is sunny and we made it! We are at the end of our list of stops for the coastal journey. Ralph and I are now faced with deciding where to go next. There are so many options. We plan to head for Port Townsend tomorrow and stay there for a little while and acclimate. And we have a pile of guidebooks to review!

On another note, my laptop isn’t working, so I can’t upload the video footage that I took. Hopefully I’ll be able to get it fixed soon.

Cruise ship in the fog 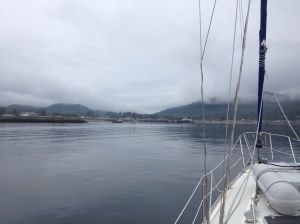 This is how I feel about sun shine and no swells!

Sail up and sun shining! 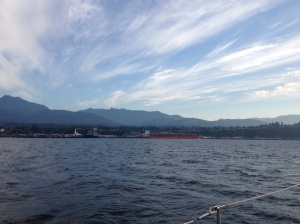 Crab traps – the nemesis of boaters 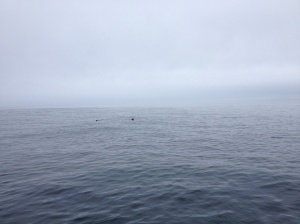 Sea lions welcoming us to the Strait. The Orcas couldn’t make it.

Thought bubble above the big boat’s head when we pulled in: “there goes the neighborhood!”