We took off from the dock in Newport around 8:30 am last Friday, again timing our travels to have the best bar conditions at the harbor entrance/exit.  Although there was noticeable current running in the river (it looks like low level rapids), we had no trouble exiting.  The weather forecast predicted 10-15 knot winds and small seas.

It was a lovely sunny day, and after we set our course northward we enjoyed our breakfast and started our watch shifts.  We decided that we would take 2 hour shifts for the entire passage rather than just at night, and maybe that way we would feel more rested and relaxed.  This was a great idea and we both felt that the passage was much better than any of our others.

The passage itself was uneventful in that we didn’t have any whale or dolphin sightings.  We did see lots of Vellella’s (sailors-by-the-sea) and other, larger, jellyfish, so it wasn’t a complete bust.  And we always have our companions, the Common Murre’s, to keep us company with their funny squawks.  The mothers and babies talk to each other frequently, and I find it entertaining to interpret what they might be saying (Mama: “Get your feathery butt over here! You’re going to get eaten by a shark!”; Baby: “I’m coming mama!” – and so on).

Regarding the weather, once again, we had much higher than predicted wind and wave activity.  It’s pretty frustrating to not be able to rely on weather information other than in a general sense.  We saw almost 30 knots of wind, and the average wind was probably between 15-20 knots.  The seas were at times confused and churny, Ralph called it “washing-machine like”, especially near the Columbia River entrance.  Not sure if this was a goodbye from Oregon or a hello to Washington!

We decided not to enter the Columbia River before we left Newport, although I’m sure it would have been beautiful. In order to get to a marina, it would take at least another two hours of travel up the river, and we didn’t want to fight the crowds (it’s a very busy area) and the bar crossing is notorious for challenging conditions.

Because of the wind and water conditions, our progress was pretty slow.  My new face mask was useful to both of us to avoid too much exposure to diesel fumes and neither of us was seasick.  For part of the night we had a bright moon and stars – that was very lovely and welcome.  We also had fog – sort of ran the gamut of weather besides rain.  We arrived at the Gray’s Harbor entrance at around 6 pm on Saturday and we had some difficulty navigating to the marina because of discrepancies between the markers and our charts, and as I say in the video (link below) we missed the main marina entrance, but luckily, it was no harm done and we happily docked at the guest dock.

There are several restaurants on the waterfront here, and we had a good meal out on Saturday night.  Sunday we didn’t do much (too tired), but yesterday we went for a bike ride on the beach trail.  It was such a beautiful day, sunny and really warm – there were a lot of surfers and others on the beach and in the water.  The trail was great, and it also went by the Gray’s Harbor lighthouse (tallest lighthouse in the Pacific Northwest – at 107′); we decided to take the tour and walked up the winding staircase.  There were interesting things for both of us there.  The original lighthouse construction plans were on display, and I enjoyed reviewing the building details (4′ thick concrete walls, people!) while Ralph was fascinated by the huge Fresnel lens which was used until 1992 and how it operated sitting in a bath of mercury to allow it to rotate.  Now the light is provided by a simple light in a plastic housing.

This is pretty much a tourist town, although it is very quaint.  There isn’t even a grocery store here anymore, it had to close down.  Tomorrow we plan to head northward for our final northern leg of this trip.  We are rounding Cape Flattery and will stay over at Neah Bay for a couple of days before moving on to Port Angeles and then probably Port Townsend and Anacortes, and then – the San Juan Islands! I included a map in the photos below and drew out our basic route from here for those of you who aren’t very familiar with the geography up here.  Ralph and I are very thankful that we have made it this far safely and we are very much looking forward to being in the protected waters of Washington and Canada.

Regarding the video – it drags a little, in my opinion.  I had some trouble with the voice over recording and I had to re-do it about 5 times, but I hope you find it interesting. 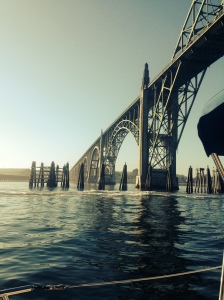 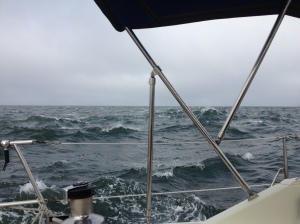 This is my new toaster! Works pretty well. 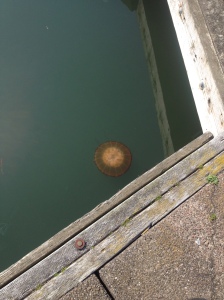 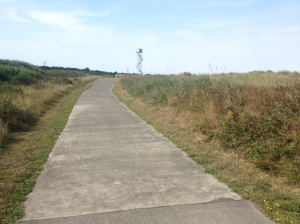 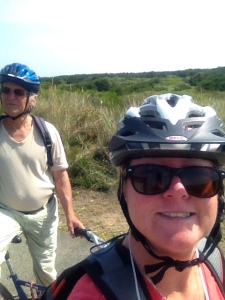 The new light that takes the place of the big light 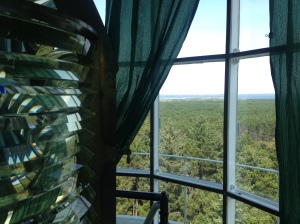 Looks like a long way up, but it really wasn’t. 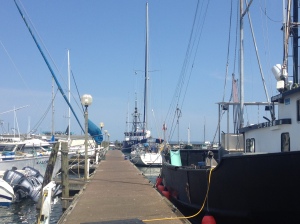 Toga at the guest dock

Starting at the middle left, this is where we are now – Gray’s Harbor. Follow the red dashed line and circles for our probable next several stops.