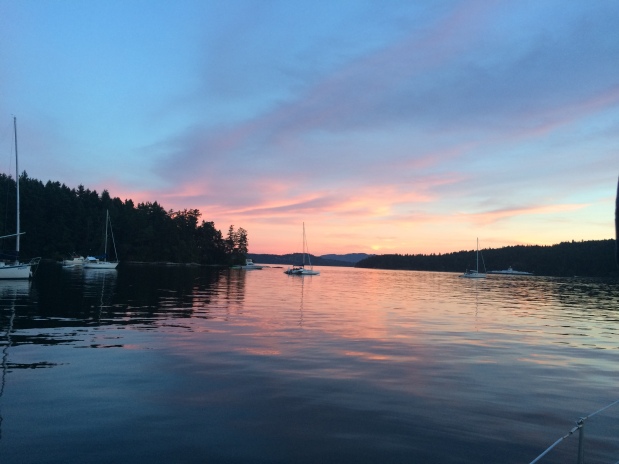 We left Port Browning marina on Monday and headed to Montague Harbour on Galliano Island, which I have written about before and is a favorite spot for many reasons. We were only able to sail a little bit, but we did see dolphins along the way – that is always a treat.

After anchoring we took a walk at the park and had a swim. The water is pretty cool in most of the bays, 63-64 degrees, so these are quick swims! Ralph calls them refreshing. On Tuesday it was Noah’s 16th birthday, so he and I went on an adventure that is famous in Montague Harbour, the pub bus to the Hummingbird Pub. The bus driver, Tommy, is a famous ex-bus driver from Vancouver who hands out percussion instruments as you board and everyone rocks out as we bump along. He stops to offer rides to anyone along the road and to point out things of interest (one thing is a very large meadow where a woman takes care of retired race horses).

The pub itself is nice enough, Noah and I shared nachos and had drinks (beer for me, a special fruit drink for him) and we watched the MLB all-star game on TV. It was a fun celebration and then we went back to the boat for spaghetti and birthday brownies.

On Wednesday we decided to check out Fulford Harbour on Saltspring Island. Saltspring Island is the largest of the gulf islands and is home to lots of funkiness – artists and free spirits abound. The town of Fulford is really cute and we enjoyed anchoring there for a night. Thursday we headed to Russell Island, just about 1.5 miles away, which is a tiny island that is part of the Gulf Islands National Park reserve. At one time the island was privately owned and there is a historical home on the island. To walk around the island takes about 30 minutes and it covered with lovely trees and has beautiful vistas. We met Henri and Anne there from ArielX and two other Sceptres showed up in the small anchorage – we had a fun time socializing, kayaking and hiking. No swimming in this area – the water registered at 59 degrees! We have to draw the line somewhere.

We stayed at Russell Island for 2 nights; it really is at the top of our current list of favorites. On Saturday we went to Madrona Bay, which is near Ganges on Saltspring. Anne and Henri had given us some bait for our crab trap, so on Saturday morning we set it out. Sunday we hauled it up, only to find one crab on top of the trap (?) and one crab in the trap, which we had to release because it was a female. Oh well, hopefully next time! I shouldn’t forget to mention that we went to the fabulous Ganges market on Saturday, which is filled with work by the local artists, local foods and fresh fruits and veggies. We got ice cream.

This morning Charlie and I took Noah over to Ganges with the dinghy to he could catch his flight back to Vancouver. It was fun having a young person on board. Today it was so windy and choppy that when Charlie and I got back to the boat we were soaked! Such is boat life sometimes. We are planning to go to Roche Harbor on San Juan Island tomorrow (in Washington), so we’ve depleted our fresh food as much as possible (strange border crossing rules we have in the U.S.) We need to check out of Canada before we wear out our welcome.

Noah and I on the Pub Bus

One of the giant jellyfish around here

Pizza party with Anne and Henri

Ralph and Noah squaring off at an old form of checkers 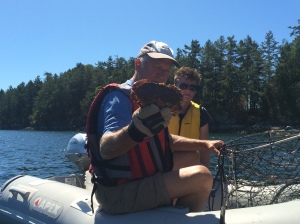 Catching crabs – this is a girl so she gets thrown back

Noah taking off from Ganges

Learning how to drive

Resting during our hike at Montague Park 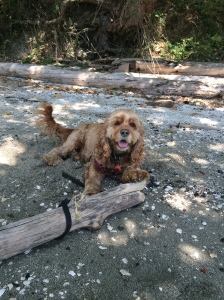 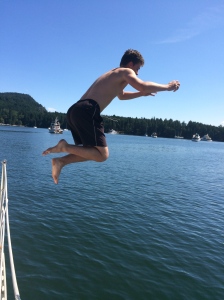 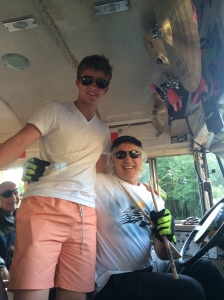 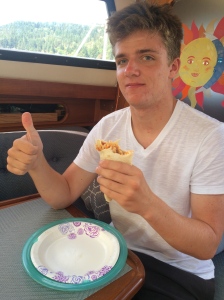 Noah giving the thumbs up to classic Johns family cuisine, the spaghetti burrito 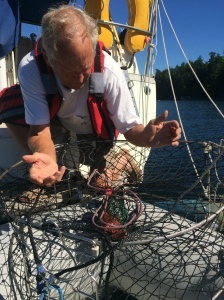 Crab trap down – this is what you see from the surface

We left Vancouver Rowing club on Tuesday as the tide was rising (we had a small issue with low tide upon entering) and headed across the Strait of Georgia toward Porlier Pass.  We had a light southeast wind and had a really peasant sail across the Strait.  The pass was calm, as we went through at about slack tide.  We decided to try to anchor at Clam Bay, but it was crowded and there wasn’t really a good place to take Charlie ashore.  So we decided to head for Preedy Harbour, a familiar place with a nice dock and warm water.

We had a calm night at anchor and the next day we decided to take a long walk and see both marinas that were close by:  we walked to Telegraph Harbour and looked at Telegraph Harbour Marina, which was really quaint and homey, and Thetis Island Marina, which had a nice pub.  We spotted a farm market neat Telegraph Harbour Marina and went in to find that it was based on the honour (nod to our Canadian friends) system. Can you imagine? Meats, fruits and veggies, fresh baked goods – it was amazing! We ended up picking out a zucchini for dinner, some tomatoes and some cherries.  The cherries were the best I’ve had in a long time. We had another peaceful night at Preedy Harbour(warm, swimming water temp).

The next day we headed to Ganges Harbour, Saltspring Island, and anchored; Noah arrived by seaplane in the afternoon.  We did some provisioning at the great market at Ganges and headed out the next day.  Our first stop was Bedwell Harbour at South Pender Island.  We picked up a mooring at the provincial park – what a lovely place.  Noah and I took the dinghy out with Charlie and explored the beach and a little bit of the campground, and we also kayaked around the bay.  We took the dinghy over to Poet’s Cove resort and rubbed elbows – a very nice place.   We had a very calm night at anchor.

The next morning, Noah and I decided to take the kayaks out and had a lovely paddle around with Charlie.  He likes to sit on the bow of my kayak.  We decided we would go to Port Browning, which was about a 7 mile trip.  We had a nice motor/light sail and arrived at the lovely harbor. We anchored and had a fun afternoon and evening, filled with games and popcorn (it was raining).  Our night at anchor was peaceful.  This morning we decided to try to get a spot at the dock at the marina in Port Browning, as several household chores were piling up (grocery shopping, trash, recycling, etc). The marina is really comfortable, and has a pub, cafe, store and a grocery sore within easy walking distance.  Tonight we are barbequing steaks and relaxing at the dock, having fun with Noah.  He swam in the marina pool and we’ve enjoyed warm showers. Life is grand!

Treats from the farm market 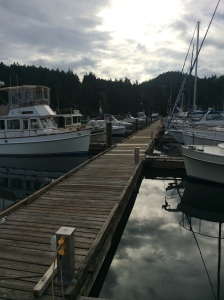 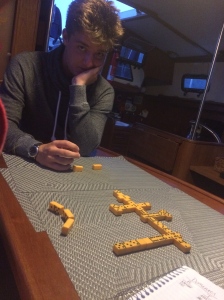 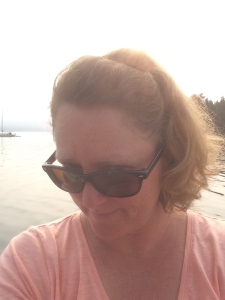 Ralph gave me a haircut – much easier to manage 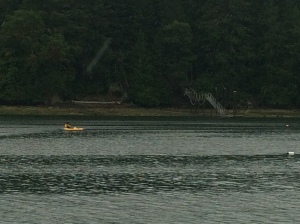 Noah kayaking in the rain at Port Browning 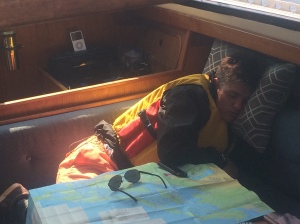 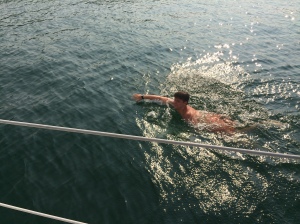 Noah testing out the PNW waters 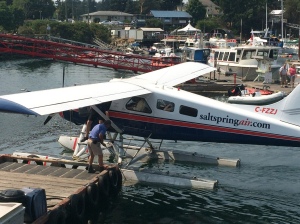 We reluctantly left Montague Harbour and headed north to Thetis Island, Preedy Harbour.  We were basically the only boat anchored there, the other two were derelicts.  It was a really hot day and after getting the anchor set we jumped in for a swim – the water was a refreshing and comfortable 72 degrees!  We had a nice evening but got up early the next morning as we were heading for the Gabrioa Island Pass and needed to arrive at the right time to pass through with relatively little current.  We got through the pass fine, although we hit a log right beforehand – there are a lot of runaway logs up here.  No damage done.

We decided to spend the night in a little cove called Dog Fish, right outside of the pass.  We set the anchor in lovely conditions – warm, light wind.  We had lunch and took a dinghy trip to the beach, where a family of geese was having a battle of wills with a racoon.  We waded and Charlie swam and ran on the beach – he was in heaven! When the evening came the wind picked up and tossed us around a bit during the night.  Our anchor was holding so there wasn’t any danger, but it was a bit uncomfortable.  I have to admit that I hadn’t checked the weather.  It had been so calm and warm, I just didn’t think about it.  The next morning we needed to cross the Strait of Georgia to get to Vancouver and meet up with Amy and Michelle.  We set out at about 9 am and had 20-30 knots of wind during our crossing – it was a little rough and challenging, but the crew managed splendidly.

We’ve been staying the last several days at Vancouver Rowing Club in Coal Harbour, which is in downtown Vancouver.  It’s a great spot, right next to Stanley Park.  We arrived on Canada Day, July 1st, and we met up with Michelle and Amy a little while later.  They had been on a week-long road trip that culminated in a Vancouver visit.  We celebrated Canada Day by having  BBQ with our Vancouver friends and enjoying the fireworks over the bay – felt just like the 4th!

We had a great visit with Amy and MIchelle, did some touring of the City.  Yesterday morning I drove them down to Bellingham to fly home – a short but sweet visit.  Now Ralph and I are preparing to cross the Strait again tomorrow and head back to the islands.  My nephew Noah will arrive in a few days for a 10-day cruise! We are excited to have him.

Smoke on the water – forest fires raging in BC

Fun dinners on board! 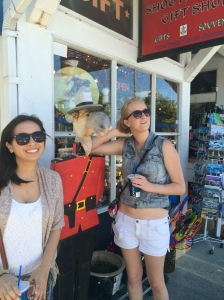 Got to check “photo with a Mountie” off the list! 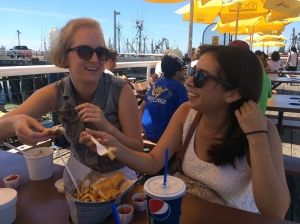 Had delicious fish & chips in Steveston 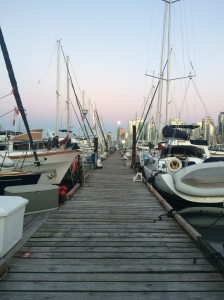 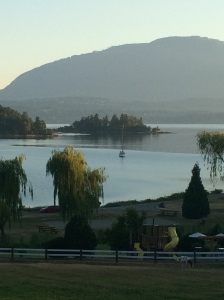 Spotted an eagle at Princess Harbour

Amy & Michelle trying on Canada hats for me

Hanging out on board, playing Trivial Pursuit

Going to a party by boat!