We were a little sad to leave Port Townsend last Monday, August 25th.  It’s such a comfortable marina and we had sunny, warm weather.  My step-brother Matt came to visit us and we had a great time catching up.  We walked to town and then came across a farmer’s market on the way back where we picked up a beautiful salmon for $20.  We also bought some gorgeous tomatoes, and together with the beets that Matt brought us from his garden, we had a tremendous feast on Saturday night.  It was great fun.

We had planned for our first stop in the San Juan Islands to be James Island, a tiny State park.  We reached it after about 4 hours of sailing/motor sailing in light winds.  There are only a few places to either dock or moor at the island (no anchoring), and the west side was full.  We decided to anchor right across the water at Decatur Island (Decatur Head).  We put the anchor down in about 15 feet of water, and we were done for the day!  It was so calm there – we had a sweet first night in the islands.  There were several harbor porpoises swimming in the bay and some cute little harbor seals.

The next morning we decided to head to Spencer Spit State Park, which was only about 6 miles away.  That’s kind of the way it is up here – there are so many islands and places on each island to see and they are close together.  It’s awesome and sometimes overwhelming.  We approached the park and saw that a mooring was available.  For those of you not familiar, this is a float that is anchored to the bottom with a heavy weight or the like, and you tie up to it.  (For those of you familiar with Catalina moorings, there is no stick to pick up, you have to tie a line to the ring on the mooring ball – quite a trick!).  The moorings cost $12/night, which is a deal.  We let the dinghy down from the stern swim step and I drove while Ralph caught the mooring with the boat hook and tied a line to the ring.  Then we dragged the line to the bow and tied it on.  We were done with our day’s work in about an hour!  After settling in we took the dinghy to the beach to walk around.  There is a marsh on the spit with lots of interesting birds, etc to look at.  It’s been pretty nice almost every day, but it does get cool in the evenings.

We decided to stay two nights at Spencer Spit.  The second day we blew up our inflatable kayaks and took our trash to the trash receptacles in the park and paddled around, in addition to doing some usual boat chores.  I’m pretty sure I saw an eagle – either a juvenile bald eagle or a golden eagle.  I’m really excited to spot eagles and I can’t wait to see orcas!

Speaking of orcas, we are now moored in Cascade Bay on Orcas Island.  We are meeting some friends here this weekend and we decided to get here early so that we might get a spot – our timing was perfect!  We got a great mooring for $25/night and that includes access to the Rosario resort on the island (nice swimming pool and access to showers included).  The mansion is in the national historical places register and is really interesting and beautiful.  Yesterday I took the bus to the biggest town on Orcas Island, Eastsound, to get groceries.  It’s a really cute little town.  Later, we toured the mansion and stayed for a musical performance on the 1900 Steinway piano and a giant pipe organ – just wonderful.

Today we plan to hike to Cascade Lake and meet up with our friends.  We’re having a wonderful time – it is really amazing here with gorgeous views everywhere you look.

WiFi and phone service is really spotty in the islands, so although I am trying to update the blog once a week, I might not always be able to do so.  I’ve been taking video, but there’s not enough bandwidth here to upload it, so I’ll save the footage and load a video when I can. 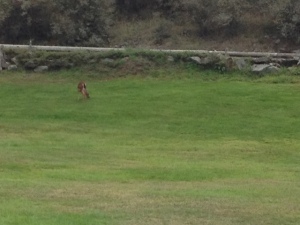 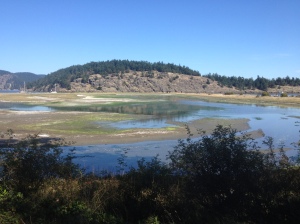 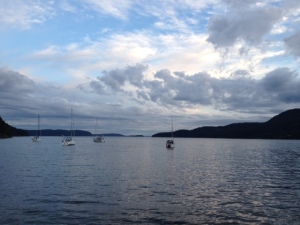 Rain on the way, Cascade Bay

Sailing with the Mainsail, on the way to Orcas Island 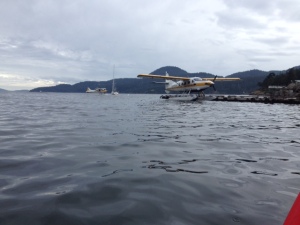 Sea planes lining up to delivery passengers to the Rosario resort

Toga on a Rosario mooring in Crescent Bay 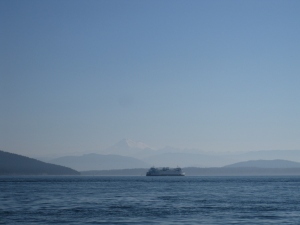 Ferry with snow covered mountains in the background 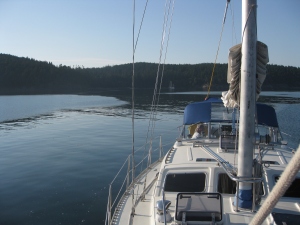