It started to rain during the fitful night we spent anchored at Port Orford.  We weren’t planning to leave particularly early from there because we needed to wait to cross the Coos Bay Bar on the flood tide, and that wouldn’t be until early evening.  We thought about waiting out the rain, but the calm weather window beckoned, so we put on our foul weather gear, hauled the anchor and took off.

We spent the first couple of hours getting around two reefs off Cape Blanco.  We probably weren’t out for 30 minutes before we had our first whale sighting, about 200 feet off the port side of the boat – a very large whale surfaced.  We saw many more whale spouts during the day and several whales close enough to see fairly well.  They appeared to be blue whales and/or fin whales.

We crossed the Coos Bay bar at about 6:30 pm, and the conditions were as calm as we could expect.  The course to the marina is sort of confusing, with twists and turns and many submerged obstacles, so we were watching the depths, charts and our reference materials constantly.  It wasn’t long before we spotted a very large dredging operation going on, and it appeared to be right in the channel where we were headed.  As we got closer, we confirmed this and we couldn’t see a way around it, so we called them on the radio.  We got a vague response, but waited for about 20 minutes while some other boats came out of the marina.  Finally, we decided to go for it and we passed the dredger without incident – it was stressful though!  Since we have been here, the dredging operations have moved closer to us until last night, when they were right next to us.  They seem to be moving back out to the channel now.

We’re docked at the guest dock at Charleston Marina, which is a working harbor, as most have been since we left southern California.  While we’ve been here we got some locally caught fresh albacore, which we seared and ate with a soy wasabi sauce (yum!) and a live Dungeness crab that we greatly enjoyed for dinner last night (in the interest of full disclosure, I have never cooked shellfish before, but it went OK.  The only hard part was putting the guy in the pot – he really didn’t want to go). Fresh, inexpensive seafood is sold just two docks over from us.  I really don’t think that I have understood how much better really fresh seafood is.  I am committed to supporting our local fishermen now, wherever we are.

The dock we’re on is popular with local people for crabbing.  Every day there are several families on the dock and they’re usually successful catching crab that are big enough to keep. I found out today that a yearly crabbing permit is only $7 if you’re a local and $10 if you’re not.  That’s pretty cheap.

Today we restocked on groceries in town, which is about 6 miles away, and we plan to eat some more fresh seafood while we are here, because it’s just wonderful.  There is currently no indication of when the weather is going to let up so we can head north, and we expect we’ll be here for several more days.  It’s OK with us – we’re really enjoying the people here and the laid back atmosphere.  Also, it’s been sunny every day!  Not really warm, but the sun is very welcome.  Within the next couple of days we plan to go hunting for fresh blackberries and hike to a couple of local beaches.  We also have more mundane things to take care of, like laundry, filling our propane and a couple of boat projects.  We discovered on the way here that both our mechanical and manual bilge pumps are not working, so we are tracking down those issues; luckily there is a marine store only a mile away.  Bilge work is one of the less fashionable parts of boating, but we do what we have to do!

Here, also, is some video from our week. http://youtu.be/S5qbBckwQqk 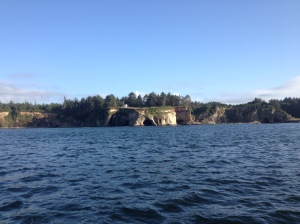 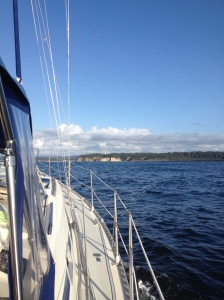 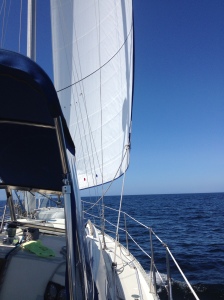 A tiny bit of sailing 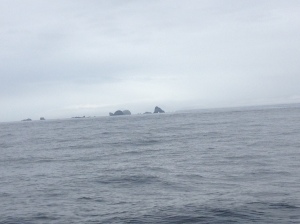 One of my terrible whale photos 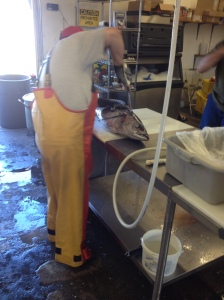 Our mess of tools 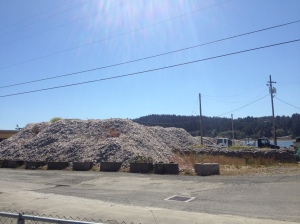 Crabbing on the dock 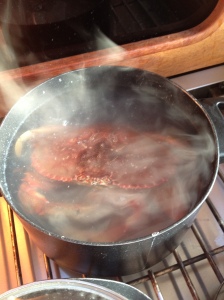 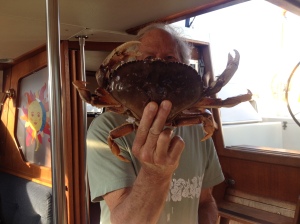 Dressed for the rain in our foul weather gear, affectionately known as “foulies”