We had our early morning wake up on Wednesday and exited the Eureka Bar at high tide, 3:30 a.m.  I was very happy when we woke up and there was no fog!  It’s busy enough in the harbor without having to deal with visibility.

After we were past the bar and on course, I was feeling tired, so I took the first rest and Ralph kept watch.  After I woke up I got to see that last of the sunrise, really pretty.  My watch was great, once again I enjoyed it.

We had good weather on the trip, as forecast.  It is still cold on the water, I guess that won’t change.  Both of us keep updating our outfits and are wearing several layers – I think we have it down and are feeling pretty comfortable now in the elements.

Around mid-morning we both noticed some small floating objects that weren’t familiar to us – at first they looked like bubbles.  Upon closer inspection, they had a kind of sail above the water.  We decided that they must be creatures and, in the interest of science, we had better catch one to get a better look.   At first I tried with a bucket attached to a line, but that just got me wet.  Then Ralph rigged up the bottom of a plastic bottle taped to the boat hook (this is a plastic hook on the end of a telescoping pole).  I caught one right away and after we inspected it and took photos we let it go.  I suspected it was a kind of jellyfish, and I searched on that when we got to Crescent City.  Turns out these things are a jellyfish called Velella velella (http://en.wikipedia.org/wiki/Velella) – we saw many thousands of them on our way here. We also caught a glimpse of a whale, the first one we’ve been in a while.

Crescent City has a brand new marina because of damage suffered from the 2011 Tsunami.  The design of the supports is pretty impressive – they are large and there are lots of them.  We noticed that they aren’t as tall as the high water mark from the 1964 Tsunami, which was even more devastating.  There are a lot of details still under construction here, and we are not finding the city very interesting (Ralph says it reminds him of Barstow – so there you go).  There is a grocery story close by, which is always nice.

We are planning to leave on Sunday for Brookings, OR (at the Chetco River).  It’s only 18nm away, so it will be a short trip, but it’s supposed to be a quaint place and the weather north of there isn’t so nice.

A prettier shot a little later

This is how we first saw the Velella 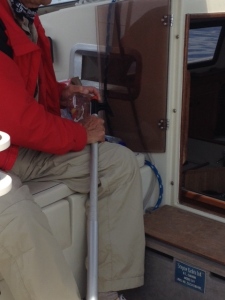 Ralph rigging up our jellyfish catcher 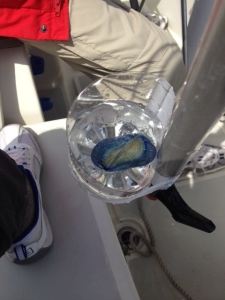 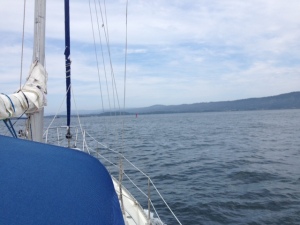 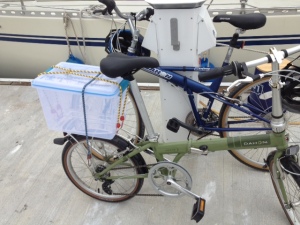 This is our new carrying system for groceries, besides our backpacks 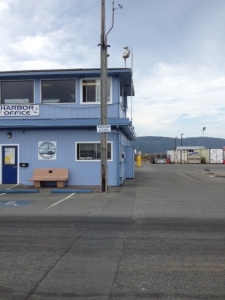 Sign depicting the high water mark from the 1964 Tsunami